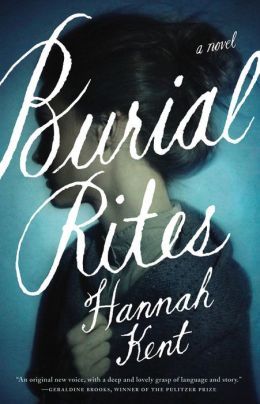 Goodreads Summary:
A brilliant literary debut, inspired by a true story: the final days of a young woman accused of murder in Iceland in 1829.
Set against Iceland's stark landscape, Hannah Kent brings to vivid life the story of Agnes, who, charged with the brutal murder of her former master, is sent to an isolated farm to await execution.
Horrified at the prospect of housing a convicted murderer, the family at first avoids Agnes. Only Tóti, a priest Agnes has mysteriously chosen to be her spiritual guardian, seeks to understand her. But as Agnes's death looms, the farmer's wife and their daughters learn there is another side to the sensational story they've heard.
Riveting and rich with lyricism, BURIAL RITES evokes a dramatic existence in a distant time and place, and asks the question, how can one woman hope to endure when her life depends upon the stories told by others?


It's strange how a book can be both beautiful and melancholy at the same time. Burial Rites is by no means a light read, but it's certainly worth reading. It follows the story of Agnes, a woman convicted of murder and slated for execution. The people around her look at her with suspicion and fear - clearly she is a witch with not a drop of good left in her. As Agnes' story unfolds, you begin to get a much better picture of what happened and who is to blame, and the lines between guilty and innocent begin to blur.

The plot reminded me a bit of Alias Grace - a woman is convicted of murder, and you don't know if she's guilty or innocent. They are set in different time periods, so they are really different stories, but in both cases I enjoyed getting to see new sides to all the characters as the book progressed.

I really enjoy historical fiction because you learn so much about other cultures and other time periods. I thought this book was especially good at immersing me in a culture I otherwise knew nothing about. Iceland is harsh yet beautiful, and the story can be described in much the same ways. People work together just to survive; kindness isn't a gift so much as a necessity. It's incredible to see how strong and resilient everyone is, and how much they endure simply to get through another day. The Icelandic names were tricky at first, but I think I got the hang of it by the end.

The writing style is gorgeous. It's often sparse, but every word is carefully chosen and you can really feel the intensity of the situation. I really enjoyed this story, even if it was slow and melancholy - it was equally beautiful.