Showing posts from April, 2017
Show all

Title:  Range of Ghosts Author:  Elizabeth Bear Genre: Fantasy, historical fantasy My rating: 5 of 5 stars Goodreads Summary: Temur, grandson of the Great Khan, is walking away from a battlefield where he was left for dead. All around lie the fallen armies of his cousin and his brother, who made war to rule the Khaganate. Temur is now the legitimate heir by blood to his grandfather's throne, but he is not the strongest. Going into exile is the only way to survive his ruthless cousin. Once-Princess Samarkar is climbing the thousand steps of the Citadel of the Wizards of Tsarepheth. She was heir to the Rasan Empire until her father got a son on a new wife. Then she was sent to be the wife of a Prince in Song, but that marriage ended in battle and blood. Now she has renounced her worldly power to seek the magical power of the wizards. These two will come together to stand against the hidden cult that has so carefully brought all the empires of the Celadon Highway to strife
Post a Comment
Read more 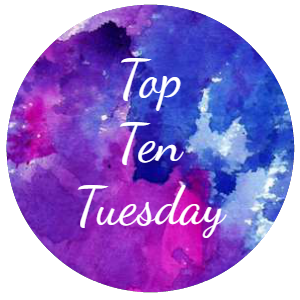 Top Ten Tuesday is a meme hosted by  The Broke and the Bookish .  This week's theme: Top Ten Book Turnoffs Somehow I thought this list would be really easy for me, because there are so many blurbs that I read and then roll my eyes. There have been a few of audiobooks that I started recently but couldn't deal with after the first 20 pages so I just DNFed them. But despite all that it was actually pretty hard to remember exactly what kinds of things make me not want to pick up a book!  Here we goooooo 1. Spoiled/selfish/vain main characters (usually of the rich white girl variety) 2. Love triangles (I did enjoy the Hunger Games but the love triangle thing was such an annoyance) 3. Catty/mean girls (why is the beautiful yet bitchy girl still a trope -___-) 4. Romance-heavy (I have my ships, but when the romance takes precedence over THE END OF THE WORLD I'm pissed) 5. Purple prose (some people can pull it off -
Post a Comment
Read more

Review:  Skullsworn Author:  Brian Staveley My rating: 5 of 5 stars Goodreads Summary: Pyrre Lakatur doesn’t like the word skullsworn. It fails to capture the faith and grace, the peace and beauty of her devotion to the God of Death. She is not, to her mind, an assassin, not a murderer--she is a priestess. At least, she will be a priestess if she manages to pass her final trial. The problem isn’t the killing. Pyrre has been killing and training to kill, studying with some of the most deadly men and women in the world, since she was eight. The problem, strangely, is love. To pass her Trial, Pyrre has ten days to kill the ten people enumerated in an ancient song, including "the one you love / who will not come again." Pyrre is not sure she’s ever been in love. If she were a member of a different religious order, a less devoted, disciplined order, she might cheat. The Priests of Ananshael, however, don’t look kindly on cheaters. If Pyrre fails to find someone to love,
Post a Comment
Read more 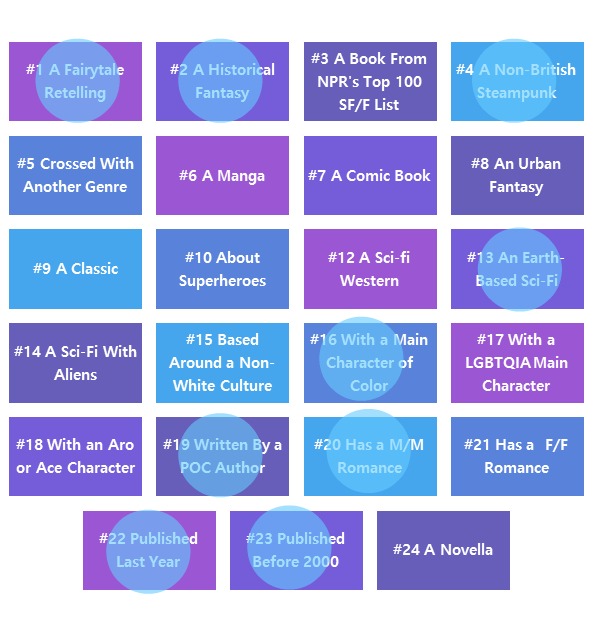 We're about a quarter of the way through the year, so here's an update on how I'm doing on the reading challenge! Purple  books are ones I've finished, and ones in gray are books I'm planning on reading for the challenge. 1) Fairy tale retelling: Miranda and Caliban by  Jacqueline Carey - A retelling of Shakespeare's The Tempest 2) Historical Fantasy: Range of Ghosts by Elizabeth Bear - an alternate history/fantasy based on Mongolia in the time of Genghis Khan 3) Anathem or Snow Crash by Neal Stephenson 4) non-British Steampunk: Crooked Kingdom by Leigh Bardugo - Russian/Scandinavian steampunk?  7) Comic book: The Complete Persepolis by Marjane Satrapi 9) A classic: Foundation by Isaac Asimov 13) earth-based sci-fi: Station Eleven by  Emily St. John Mandel - a beautiful post-apocalyptic story about how people find their humanity after the end of the world 16) POC MCs: Seveneves by Neal Stephenson - multiple POC main characters, including Moir
Post a Comment
Read more

TTT: Top Ten Of The Most Unique Books I've Read

Here are some of the most unique books I've ever read! I love them all and definitely recommend them :)   How many other books have you read involving 4 alternate Londons, a magical cloak, and a badass cross-dressing pirate? None? That's what I thought :)   This book is gorgeously written, and I cannot even begin to describe how beautiful and unique this magical circus is.   The Magician's series as a whole is unique in that it's all about subverting fantasy tropes but it's also about growing up. I loved the third book!   Not only is this a ridiculously inventive and hilarious and horrifying sci-fi book, the words on the page make pictures that also tell a story. Such a unique and amazing series!   I don't even know what genre this book is, it's a little bit of everything, honestly! Plus it's a love letter to bookstores, which is amazing.   Shameless plug for on
Post a Comment
Read more

Title:  Winter Tide Author:  Ruthanna Emrys Genre: Science fiction, historical fiction My rating: 3 of 5 stars Goodreads Summary: After attacking Devil’s Reef in 1928, the U.S. Government rounded up the people of Innsmouth and took them to the desert, far from their ocean, their Deep One ancestors, and their sleeping god Cthulhu. Only Aphra and Caleb Marsh survived the camps, and they emerged without a past or a future. The government that stole Aphra's life now needs her help. FBI agent Ron Spector believes that Communist spies have stolen dangerous magical secrets from Miskatonic University, secrets that could turn the Cold War hot in an instant, and hasten the end of the human race. Aphra must return to the ruins of her home, gather scraps of her stolen history, and assemble a new family to face the darkness of human nature. I didn't realize Winter Tide was based on Cthulu mythology and the worlds of HP Lovecraft until I started reading it. The funny thing is
Post a Comment
Read more

Title:  Waking Gods Author:  Sylvain Neuvel Genre: Science fiction My rating: 5 of 5 stars Goodreads Summary: As a child, Rose Franklin made an astonishing discovery: a giant metallic hand, buried deep within the earth. As an adult, she’s dedicated her brilliant scientific career to solving the mystery that began that fateful day: Why was a titanic robot of unknown origin buried in pieces around the world? Years of investigation have produced intriguing answers—and even more perplexing questions. But the truth is closer than ever before when a second robot, more massive than the first, materializes and lashes out with deadly force. Now humankind faces a nightmare invasion scenario made real, as more colossal machines touch down across the globe. But Rose and her team at the Earth Defense Corps refuse to surrender. They can turn the tide if they can unlock the last secrets of an advanced alien technology. The greatest weapon humanity wields is knowledge in a do-or-die battle
Post a Comment
Read more
More posts