Review: The Well of Ascension 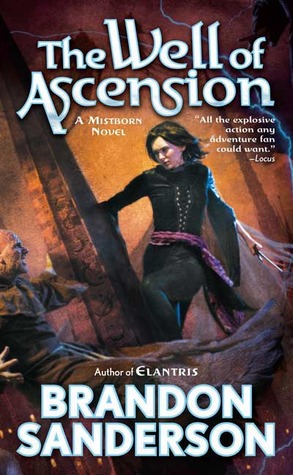 Goodreads summary:
They did the impossible, deposing the godlike being whose brutal rule had lasted a thousand years. Now Vin, the street urchin who has grown into the most powerful Mistborn in the land, and Elend Venture, the idealistic young nobleman who loves her, must build a healthy new society in the ashes of an empire.
They have barely begun when three separate armies attack. As the siege tightens, an ancient legend seems to offer a glimmer of hope. But even if it really exists, no one knows where to find the Well of Ascension or what manner of power it bestows.
It may just be that killing the Lord Ruler was the easy part. Surviving the aftermath of his fall is going to be the real challenge.


This book is so slow. I was bored through the middle, but I still trudged on.

The last fifty pages of this book had me at the edge of my seat and the final words had me leaping to my feet. I'm not sure I would say the plodding was necessary - the titular well of ascension isn't so much as mentioned until almost the end - but it was definitely worth it to get to the end (and even more worth it to get to an incredible third book).

The Well of Ascension picks up a couple of years after the end of The Last Empire. Vin and co. are attempting to establish order and rebuild their world after overthrowing the Lord Ruler. There's a lot of politics, a lot of threats and manipulations, and a lot of whining mopey characters. But then the end happens and everything gets turned on its head and you are left in utter delightful shock.

Vin and Elend are both incredibly whiny in this book, trying to make their relationship work despite both of their incredible burdens/stresses and responsibilities. It was almost unbearable to keep hearing them doubting themselves and thinking they each were unworthy of the other or simply being used but not loved etc etc. I also wanted to whack Breeze over the head with a frying pan (can you tell I've watched Tangled recently?). My favorite character, Sazed, thankfully continued to be awesome (if anything, even more so than in the first book). So thank you Sazed, for making the middle of this book bearable. I also really liked Zane - he was really freaky, and although I didn't realize it at the time, he is the first hint of things to come in the third book.

I don't want to spoil anything, but the end of this book gets a very unexpected ball rolling, which snowballs into the third book. Let's just say not everyone is as good - or evil - as we were led to believe in the first book. There are larger forces at work...

I can't say this book is particularly good, but I can say that the third book is definitely worth your time. So read this one, if only as a stepping stone to something better.