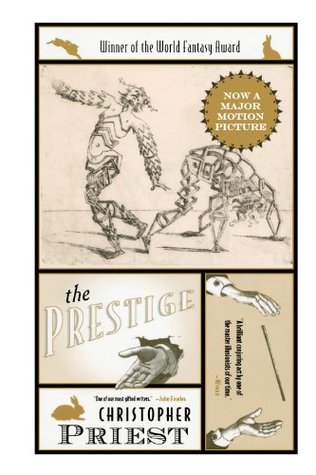 Goodreads Summary:
In 1878, two young stage magicians clash in the dark during the course of a fraudulent séance. From this moment on, their lives become webs of deceit and revelation as they vie to outwit and expose one another.
Their rivalry will take them to the peaks of their careers, but with terrible consequences. In the course of pursuing each other's ruin, they will deploy all the deception their magicians' craft can command--the highest misdirection and the darkest science.
Blood will be spilled, but it will not be enough. In the end, their legacy will pass on for generations...to descendants who must, for their sanity's sake, untangle the puzzle left to them.

For once I liked the movie better than the book!

I love stories told by unreliable narrators, and I really enjoyed how that aspect was handled in this book; Borden's diary and Angier's "prestige" were interesting puzzles in their own right. The entire narrative was almost like an illusion - you see pieces that demand to be put together, but you don't know if what you see is actually what is happening.

I felt like some of the motivations and explanations weren't strong enough to warrant the intensity of the rivalry between the two magicians. I did like seeing how the rivalry had effects on the generations afterwards as well. At the same time, I felt like less time and importance could have been given to these future generations; while they serve as an interesting frame, I didn't find their stories as compelling as that of the original rivalry.

Parts of the book also seemed very convoluted, especially since you had to keep re-evaluating what you "know" as more information is given to you. As I mentioned before, I enjoy stories with unreliable narrators, but at times it seemed like the narrators were trying so hard to confound you that the truth didn't make much sense. At time underwhelming and at others simply absurd, I didn't think the final effect was as powerful as it could have been.