Review: Of Metal and Wishes

Goodreads Summary:There are whispers of a ghost in the slaughterhouse where sixteen-year-old Wen assists her father in his medical clinic—a ghost who grants wishes to those who need them most. When one of the Noor, men hired as cheap factory labor, humiliates Wen, she makes an impulsive wish of her own, and the Ghost grants it. Brutally.
Guilt-ridden, Wen befriends the Noor, including their outspoken leader, a young man named Melik. At the same time, she is lured by the mystery of the Ghost and learns he has been watching her... for a very long time.
As deadly accidents fuel tensions within the factory, Wen must confront her growing feelings for Melik, who is enraged at the sadistic factory bosses and the prejudice faced by his people at the hand of Wen’s, and her need to appease the Ghost, who is determined to protect her against any threat—real or imagined. She must decide whom she can trust, because as her heart is torn, the factory is exploding around her... and she might go down with it. 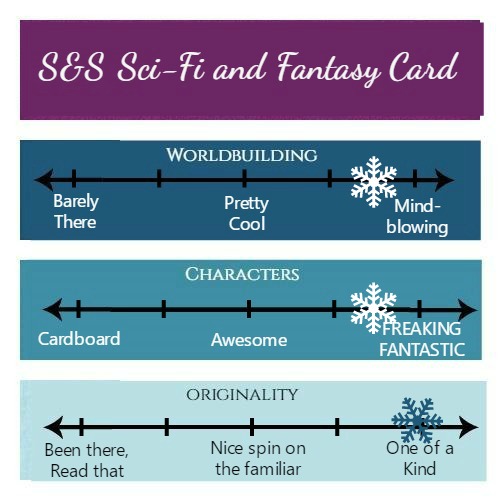 Dare I say it, better than the original!

Sarah Fine takes the classic story of the Phantom of the Opera and transplants it to a slaughterhouse factory in China. Racism, classism, sexism, sickness and disability, dignity and shame...this book covers a lot of ground but it is all handled extraordinarily well. The writing was gorgeous, even when it painted vivid pictures of the not so gorgeous goings-on of a slaughterhouse. Let's just say...accidents happen.

All the characters are complex, and at times Wen can be close-minded and selfish, but she grows tremendously as the story progresses. I know a lot of people (including myself) were bothered by the extent of slut-shaming and rape culture in this book, but I never felt like the author was trying to perpetuate rape culture or saying "This is how the world works and how it should work." There were a few observations Wen made (especially about her fellow women and her own worth in terms of her "purity") that made me cringe internally, but then you remember that the world she is growing up in is a very different one than the one we live in; this book may be set in an alternate history China, but it's still very much rooted in traditional Asian values. I'm attributing the extent of rape culture on the historical setting; I hope I'm not wrong!

The Ghost in this book is a complex, nuanced character who terrifies you at some points and then makes your heart melt at others. He may seem merciless and cruel, but he's also a broken individual who is trying to find justice for himself and those he cares about. In a twisted way, the Ghost believes he is always doing the right thing, no matter how bloody the consequences.

I adored this book. It's dark and terrifying, but it is also heart-warming and poignant. I highly recommend it, whether you are familiar with the original Phantom of the Opera or not!

Thanks Nikki for the recommendation!