Goodreads Summary:The first installment of an adventure featuring stolen books, secret agents and forbidden societies - think Doctor Who with librarian spies!
Irene must be at the top of her game or she'll be off the case - permanently...
Irene is a professional spy for the mysterious Library, which harvests fiction from different realities. And along with her enigmatic assistant Kai, she's posted to an alternative London. Their mission - to retrieve a dangerous book. But when they arrive, it's already been stolen. London's underground factions seem prepared to fight to the very death to find her book.
Adding to the jeopardy, this world is chaos-infested - the laws of nature bent to allow supernatural creatures and unpredictable magic. Irene's new assistant is also hiding secrets of his own.
Soon, she's up to her eyebrows in a heady mix of danger, clues and secret societies. Yet failure is not an option - the nature of reality itself is at stake. 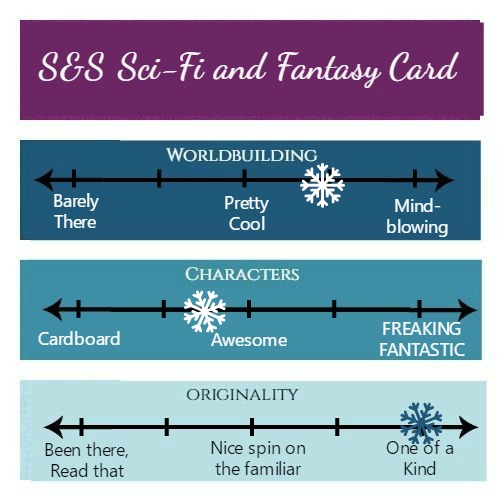 I had heard many awesome things about The Invisible Library, and the premise sounded pretty cool. I was really excited to read a steampunk novel that also featured Librarian-spy-thieves. I love characters who love books, and I love reading about spies and thieves, so naturally I loved Irene. I wasn't as in love with the book as a whole though. My main complaint was that the mystery moved too slowly, and I didn't really like Kai for most of the book (or his relationship/banter with Irene). When you don't love one of the two main characters, it gets hard to stay invested in the story. But Kai grew on me eventually, when he was done brooding and spilled all his not-so-hard-to-guess secrets.

The world building in this book was really cool. I loved the concept of the Library that exists in a parallel dimension, with portals to worlds all over space and time. I also really liked how more Chaos-filled worlds had technology and/or magic that defied reason - it was fun to see how crazy things could get.

I can't put my finger on why I didn't love this book, but I did have fun reading it. It's quick and enjoyable, although sometimes the big reveals and twists aren't actually that hard to guess before they're revealed.