Grad school is frying my brain, so I've been reading a lot of graphic novels lately. It's so much more fun to stare at the gorgeous art and flipping through a graphic novel just requires less concentration than sitting down and reading a book. My OTSP Secret sister, Kelley, said Monstress was one of her favorite graphic novels, so I had to give this a shot. My other OTSP Secret sister, Angie, was kind enough to send the first two volumes to me, so THANK YOU BOTH FOR ENABLING ME TO DISCOVER ONE OF THE LOVES OF MY LIFE. (Shameless plug, if you haven't heard about #otspsecretsister, you're missing out!! It's a lovely community of book-loving, kind people who just want to spread cheer and happiness, and I've made great friends through it).


I'm going to try out a slightly different review format for graphic novels than books, so let's see how this goes.

Let's just start off by saying that the art in Monstress is absolutely stunning. The setting is an Asian-inspired steampunk world, so there are a lot of intricate Asian motifs in the embroider of the characters' clothing and in the architecture. Even the monsters are incredibly intricately drawn, equal parts terrifying and breathtakingly beautiful.

Sana Takeda is a wizard with conveying emotions through her art. Just look at this darling and tell me your heart isn't melting. 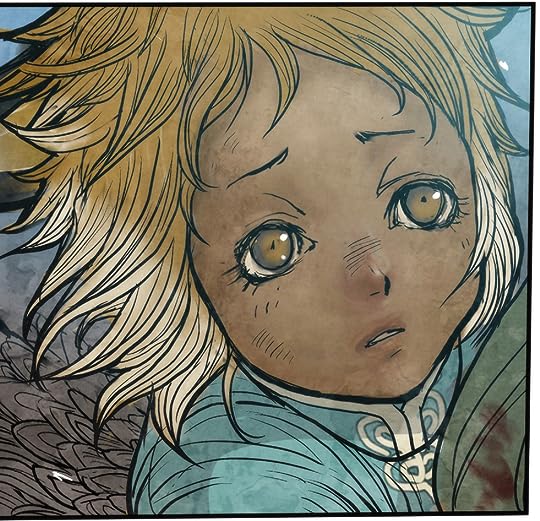 She also manages to make the most brutal and horrifying scenes appear beautiful. There are quite a few torture scenes and similarly disturbing panels, but none of them seem gratuitously gory. They are chilling yet hauntingly beautiful.

Again, Monstress is set in an Asian-inspired steampunk world, but one detail I didn't mention earlier is that it's a Matriarchal society. Nearly all of the main characters are women, and all the people in power are women. There are so many intelligent, fierce, flawed women in this story, and I love that none of them are reduced to stereotypical roles.

I will admit that I was very confused when the story started. Marjorie Liu doesn't coddle you or ease you into the story, you are brought straight into the middle of the action and it's up to you to piece together how the world works. There are tensions between many political and racial groups, and a bloody history between different groups that is revealed slowly. It's a little hard to keep track of who is on whose side because there are many twists and turns and hidden revelations, but that just made me more excited to re-read the series and see how my perspective changes once I have more context.

I love literally everything about this story, I would highly highly recommend it!!