Basically it boils down to this: If I get fun of for a certain part of my culture or heritage, but a white person can do the same thing and is applauded for being "boho chic", it's cultural appropriation. If a bunch of white people start profiting off of a part of my culture or start a "trend" without acknowledging the source, that's cultural appropriation too.

This beverage has been making the rounds on all the health-focused hipster health blogs, and is essentially an up-cycled version of a traditional Indian home remedy for when you're sick: haldi doodh. It's essentially just a spoon of turmeric stirred into warm milk, it tastes kind of foul, and you drink it when you're sick because your grandma told you it would make you get better faster (and it totally does!). It's not a "trendy elixir", it's a traditional Indian home remedy and literally none of the hipster blogs that advertise it recognize its desi roots. Thank you Buzzfeed India for calling people out on it (and some other "trendy" food things that have recently swept through America).

The specific incident that bothered me with this was when I was at Whole Foods trying to ask about where I could find a certain ingredient. The lady I walked up to was holding packets of "gluten free organic turmeric" (exorbitantly priced, of course), and before I could open my mouth to ask my question, she said, "Hi, would you like a packet of turmeric?" I told her no, I had quite a lot at home. "Are you sure? It has a lot of medicinal properties and it's gluten free!"

Yeah, okay random white lady, please continue to explain to me how an integral part of my cuisine and Ayurvedic medicine "has a lot of medicinal properties" and is "gluten free"...

I think my anger stems from the deeper trend of white people thinking they can understand and explain anything better than the people they took the idea or product from, especially when they don't respect the origins of those ideas and products. There is no acknowledgement that people of color and other cultures can contribute positively to mainstream American culture, it always has to come from white people for it to stick.

That stings, and it reinforces this idea of "otherness" - my parents use the word "American" to mean white people because they feel like they aren't really accepted as Americans here (I mean, we've all been stared at with that "go back to your country" glare, I get it), but to me it's harder because I was born and raised here and I still don't always feel like I'm a "real American".

My culture is not a fashion statement

There was recently a Zara midi skirt fiasco (you can read all about it on HuffPost). In a nutshell, they were marketing a checkered, drab-colored skirt that looked incredibly like a lungi, or a traditional cotton piece of cloth that is wrapped and tied around the waist, generally worn casually by men in South and Southeast Asia. My grandfather would wear one every day when he came home from running errands.

The Zara skirt on the left, a traditional lungi on the right

The reason people were outraged/laughing was because this is once again a case of a European ignorance and charging exorbitant amounts of money for something that is traditional and freely accessible in another culture. Lungis are worn by farmers and laborers and people who literally cannot afford to buy themselves a pair of pants, and here Zara is selling it for 80 British Pounds. They're taking something accessible and making it "exclusive" so it's more marketable, and profiting off of it, while we south Asians get ridiculed for wearing them on a regular basis.

Don't even get me started on the distressed tanks with images of Ganesha (an important Hindu god, the remover of obstacles), Om symbols on yoga mats (I was talking to a friend about this, it's such a huge disrespect to touch something with your feet in Indian culture, so to stand on a yoga mat covered in Oms is as disrespectful and uncomfortable as burning an American flag), and henna "tattoos" at music festivals. 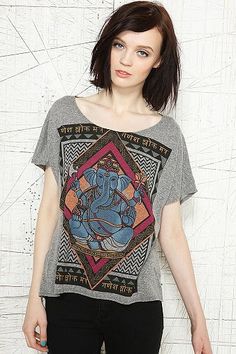 The one other example I will actually talk about is when I was browsing on etsy earlier this week, and saw a pair of pretty oxidized silver earrings. I was drawn to them because they looked a lot like the kinds of earrings I've bought with my mom in Indian markets, where artisans and silversmiths show off their work. The label? "Exotic tribal Earrings".

I'm sorry, my culture and heritage is not here to satisfy your fetish for the exotic. I am so sick of the "exotic East" trope, and it stings to see your heritage called "exotic" and "tribal" because the subtext is "less civilized". India (and much of the world) has a huge colonial past, and it wasn't that long ago. My grandparents were kids when India finally got Independence from Britain, but the ramifications of British colonialism are definitely still there. There is the huge market of fairness creams telling people with dark skin that they look ugly and less civilized, and that they should aim to look more like the white and half-white people they have playing Indians in Bollywood movies. It's incredibly toxic, and I have personally been on the receiving end of well-meaning relatives telling me how I can lighten my skin and make myself more attractive. It hurts.

I've talked about this before, but the first time I felt like I saw a character or a story that reflected my experiences growing up as a Desi-American kid was when I read Ms. Marvel last year. Kamala Khan is Muslim and Pakistani, and I'm Hindu and Indian, but we both are Desi children of immigrants who are trying to figure out who we are and where we belong. I had only ever seen stereotyped portrayals of Indian tech nerds in mainstream media, and even if there were brown people in movies, they were generally first generation immigrants, not people who had been born in America.

So when I get upset about Scarlet Johansson being cast as The Ghost in the Shell (even though the robot is supposedly racially ambiguous?? "Major Kusunagi" though), it's because a white person took away one of the few opportunities an Asian person had to be a part of mainstream media. It's not "feminist" to agree to play the role of a badass robot lady, it's "white feminist" because she chose not to comment on the valid criticism for whitewashing the character and did not try to support her fellow actors of color. HuffPost to the rescue, far more articulate discussion than I can manage.

A similar situation with Tilda Swinton in Doctor Strange. There is a lot of Eastern philosophy in the mythology of Doctor Strange, and the only main Asian character is relegated to comic relief. It's a shame, since The Ancient One would have been a cool way to introduce a badass Asian character to mainstream media. Even if the Ancient One wasn't cast as Asian, the entire order is based in Tibet, so it would have been nice to see intelligent, respected, and well-rounded Asian characters even as supporting cast.

Since I am not the most articulate person and wrote this rant out for my own piece of mind more than anything, there are some other well-written pieces that describe my feelings better than I could. This one is by a student at UCLA (Go Bruins!) and discusses the exact feelings of shame and wanting to fit in that I experienced about my culture growing up, and exactly why cultural appropriation still cuts deep. A quote that stood out to me:

"But the reality is non-white communities continue to be ostracized for practices deeply important to their identities, while the Western world cherry-picks parts of these cultures and turns them into passing trends.

Iggy Azalea can take off her bindi when she’s satisfied with playing Indian, so she will never have to face the xenophobia of white America. Meanwhile, people like my relative’s colleagues are scorned if they want to continue dressing per their traditions, forcing them to adopt Western ways to avoid being singled out."

All of this to say, the next time someone points out an instance of cultural appropriation, maybe take a minute to think before you call them out for overreacting?

(all of this writing has got my gears turning about all my irritations with the "Asians are a model minority" myth, stay tuned for a rant about that soon lol)