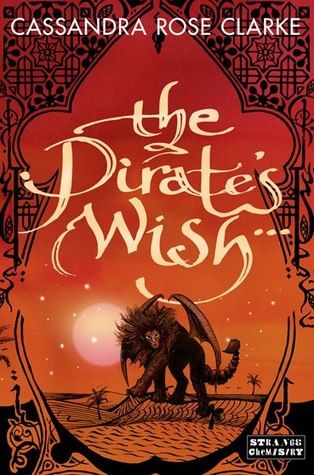 Goodreads summary:After setting out to break the curse that binds them together, the pirate Ananna and the assassin Naji find themselves stranded on an enchanted island in the north with nothing but a sword and their wits. But Naji has unseen enemies, and Ananna must face the wrath of the Pirate Confederation.
Together, they must travel afar, defeat their foes and break the mother of all curses. With all this going on, falling in love would be such a bad idea... All of this and much, much more await, in the swashbuckling sequel to The Assassin's Curse.


As I said in my review of The Assassin's Curse, the first book felt like part of a larger book instead of its own novel. The second book does a little better on that front, but it still wasn't as good as I'd hoped.

The Pirate's Wish is about how Ananna and Naji attempt to break the spell by performing three impossible tasks. They must decide who to trust and navigate treacherous conditions both in the world around them and their own minds and hearts. I thought the three impossible tasks sounded sufficiently impossible, but I felt like the third one especially was very anticlimactic. I know the author justified it, but it still felt like a cop-out to me. Ah well, at least things got more interesting in this book.

I liked the addition of a few secondary characters and their subplots. They added more color to the story, and made things a lot more interesting than the first one. I especially liked the manticore!

I felt like Ananna's love for Naji came all of a sudden at the end of the first book. Sure, she was grudgingly getting fond of him, but I didn't think true love was warranted. But putting that aside and starting this book, I liked the way Ananna's and Naji's relationship panned out. (view spoiler)[ I did like how they both had insecurities about their feelings even after "true love's kiss" - it was realistic, and not a magical "happily ever after". If anything, that kiss only made things more tangled and difficult for these two! (hide spoiler)]

I did like this one - it was both fun and funny - but it was still not quite as good as I was hoping. A solid three stars.