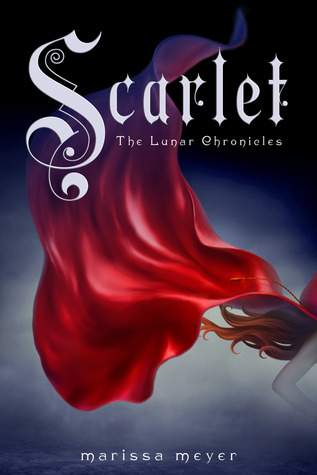 Goodreads summary:
Cinder, the cyborg mechanic, returns in the second thrilling installment of the best-selling Lunar Chronicles. She's trying to break out of prison - even though if she succeeds, she'll be the Commonwealth's most wanted fugitive. Halfway around the world, Scarlet Benoit's grandmother is missing. It turns out there are many things Scarlet doesn't know about her grandmother or the grave danger she has lived in her whole life.
When Scarlet encounters Wolf, a street fighter who may have information as to her grandmother's whereabouts, she is loath to trust this stranger, but is inexplicably drawn to him, and he to her. As Scarlet and Wolf unravel one mystery, they encounter another when they meet Cinder. Now, all of them must stay one step ahead of the vicious Lunar Queen Levana, who will do anything for the handsome Prince Kai to become her husband, her king, her prisoner.

Even better than the first one!

I have really enjoyed listening to this series on audiobooks - whoever reads it really brings the characters to life (and does excellent accents to boot!).

This book brings much higher stakes to the table, as Levana's plans become clearer and you realize how far she is willing to go to get what she wants. Even more disturbing is how far she's already gone - the earth isn't as safe as most people believe.

While the first book was only about Cinder, this one alternates between both Cinder's POV and Scarlet Benoit's. Both girls are very different - Cinder doubts herself often, and Scarlet is nothing if not stubborn and confident - but they both are fiercely loyal to the people they care about and will do whatever it takes to help them. As their stories converge, secrets are revealed and dots are connected in incredibly intricate ways. I thought the big reveals were really well done, since they tied back to the first book and explained things without making everything seem contrived (which is sometimes the case when authors try and make a big shocking reveal). I also liked how both Scarlet and Cinder had trouble adjusting to their new (true?) identities instead of just accepting it and instantly making the transition.

I also enjoyed the addition of the new characters. Wolf took some getting used to, but he grew on me eventually. There were times when I wanted to punch him, times when I wanted to get the hell away, and times when I wanted to hug the poor soul - yeah, this guy is complicated. I do like how he developed over the course of the story - it felt natural, and I like who he's become. My favorite new character has to be Thorne. He is so full of himself and so ridiculous, but he has a good heart (deep down. Ok, fine, maybe really deep down). He's hilarious, and brought some much needed laughter to a story that has a lot of tense and intense situations. My favorite character from the previous book thankfully made a reappearance, though not in the way I was expecting. No spoilers here! I missed Kai in this book, since we hardly got to see him. He does still play a big part in the story, though. I just wish he knew some of the answers that the reader already knows - I can understand his confusion and conflicted feelings, but isn't it about time he got some answers? Maybe in the next book...

I am really enjoying this sci-fi twist on fairy tales - I want to get my hands on Cress right away! Just a few more months...