Top Ten Tuesday is a meme hosted by The Broke and the Bookish.
This week's theme: Top Ten Characters that I want to be my BFFs

Ten more days to enter my 1-year blogversary giveaway of Mistborn and an amazon giftcard!

1. Sazed from Mistborn - I could relate so much to his love of learning and books. Sazed is a quiet character, and I could relate to not wanting the attention but still being driven and wanting to accomplish things. He's so loyal and is such a great friend to Vin, always putting the needs of other people above his own

2.  Jean Tannen and Locke Lamora from the Gentleman Bastards series - Jean and Locke are my latest fictional crushes, and they have such a great friendship that I want to be in on it too. They pull all sorts of insane heists and manage to survive deadly situations on an almost daily basis, and it's because at the end of they day they've always got each other's backs.

3. Iko from the Lunar Chronicles - Iko is always so cheerful and brings out the best in everyone around her. I would love chatting with her - I'm usually such a logical, down-to-earth person that I think it would be nice to talk about random fluffy happy things with her :)

4. Bartimaeus from the Bartimaeus trilogy - This guy was one of my favorite characters as a child. He was so snarky and full of himself, but he also had a soft side deep deep down. By the end of the third book, I was amazed at how much he had changed. The ending was so heartbreaking but it makes me want this djinni to be my best friend even more!

5. Rudy from The Book Thief - Rudy is so adorable! I wish I'd had a childhood friend like him - someone I could race with and steal books with.

6. Zuzana from the Daughter of Smoke and Bone trilogy - Zuze just says the greatest things! She makes the most bleak situation seem a little more hopeful, and she's so wonderfully stubborn. Who wouldn't want a "tiny rabid fairy" as a BFF? 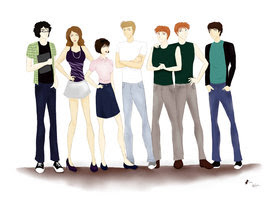 7. The Bagshaw twins from Heist Society - these guys may be minor characters, but they always make me laugh when they appear. They are always together, and always joking around, even during the most intense parts of a heist. Even if they're hardly ever serious, they definitely look out for their family and take care of their own.

8. I guess this one is cheating because he isn't from a book but the movie is based on a folktale so it kind of counts, right? Olaf BE MY BEST FRIEND.