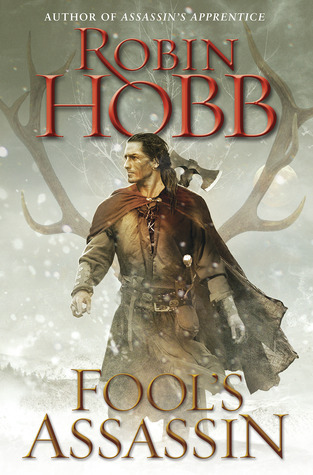 Goodreads Summary:
Nearly twenty years ago, Robin Hobb burst upon the fantasy scene with the first of her acclaimed Farseer novels, Assassin’s Apprentice, which introduced the characters of FitzChivalry Farseer and his uncanny friend the Fool. A watershed moment in modern fantasy, this novel—and those that followed—broke exciting new ground in a beloved genre. Together with George R. R. Martin, Robin Hobb helped pave the way for such talented new voices as Scott Lynch, Brandon Sanderson, and Naomi Novik.
Over the years, Hobb’s imagination has soared throughout the mythic lands of the Six Duchies in such bestselling series as the Liveship Traders Trilogy and the Rain Wilds Chronicles. But no matter how far she roamed, her heart always remained with Fitz. And now, at last, she has come home, with an astonishing new novel that opens a dark and gripping chapter in the Farseer saga.
FitzChivalry—royal bastard and former king’s assassin—has left his life of intrigue behind. As far as the rest of the world knows, FitzChivalry Farseer is dead and buried. Masquerading as Tom Badgerlock, Fitz is now married to his childhood sweetheart, Molly, and leading the quiet life of a country squire.
Though Fitz is haunted by the disappearance of the Fool, who did so much to shape Fitz into the man he has become, such private hurts are put aside in the business of daily life, at least until the appearance of menacing, pale-skinned strangers casts a sinister shadow over Fitz’s past . . . and his future.
Now, to protect his new life, the former assassin must once again take up his old one. . . .

You can find out more about the book by clicking on this link.

I feel like this entire book was exposition, and then in the last 100 pages the author remembered that things needed to happen and then crammed everything in.

This book doesn't really read like a fantasy novel. It reads more like Little House on the Prairie - it's about family and growing up and love and life and loss. There are hints at Fitz's dark past and an even darker future, but since I hadn't read the previous trilogies, I didn't know what demons tormented him. That's not to say that there is nothing dark in this novel. There are a few very unsettling events, but the majority of it is very...peaceful.

This story is also a bit of a coming-of-age story, and it's interesting comparing how Fitz's weary eyes see things so differently from a perceptive child's. The child plays a large role in this story, but I will not spoil anything by saying who or how.

I really liked the characters, Fitz and Chade especially. I was drawn in by the politics and intrigue and unspoken promises and betrayals. Unfortunately, I also felt like I was missing out on a lot. Some things were explained, but I really wish I'd had a better understanding of the characters. The Fool was hardly present in this book, but when s/he did show up, I really wanted to know more about him too.

I'd recommend it for people who have already read and loved the other FitzChivalry and the Fool trilogies, but not for people like myself who are reading Robin Hobb for the first time.

Thanks Nicole from Feed Your Fiction Addiction for recommending Robin Hobb to me. Even though this book wasn't that great for me, I'll be sure to check out the original Farseer trilogies!