Blog Tour: Scars of the Bifrost

Welcome to the Scars of the Bifrost Blog Tour, put together by Nicole at Feed Your Fiction Addiction! 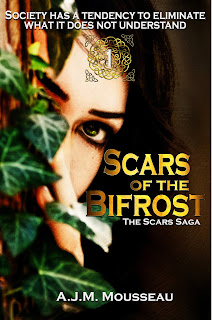 Freya Catten has lived on the fringes of society her entire life, growing up in hiding with her mother in the deepest, wildest places left in North America—the national parks and forests. Freya's mother taught her how to live off the land, away from civilization—mysteriously warning her of the dangers of getting involved with society and leaving traces of her DNA behind. But five years ago Freya's mother abandoned her, leaving Freya to survive on her own.
Freya knows how to stay alive, whether she's hiding in the forest or running on the city streets. She changes her appearance often and owns nothing but her backpack filled with survival gear and a necklace that had been her mother’s.
But, keeping one step ahead of Social Services isn't her biggest fear. Freya's true terror lies with The Takers—strange men who rappel from silver cords out of the deep blue sky from nowhere. They snatch up their victims then evaporate without a trace. Freya holds a dark suspicion—that the Takers are really after her, and they are closing in.
Freya realizes that if she is to ever have a normal life she must first find her mother and answer the questions that have kept her in hiding. Along the way, she meets Theron Hawk—a rugged teenage soldier from a war-torn country—and finds herself truly trusting someone for the first time in her life.
As secrets are uncovered, and Freya comes closer to solving the mysteries surrounding her life, her blood and the priceless necklace that lays at her throat, the scars of the Bifrost will threaten to rip apart Freya's very existence.

SCARS OF THE BIFROST is the first story in The Scars Saga and is a Young Adult science-fiction/fantasy/paranormal romance novel infused with wilderness survival, urban fantasy, dystopian elements and mythological realism.

This was one of those books that started out on the eh... side but grew on me as it progressed (moving it from a 2 star to a 3 star rating). I think one of the major issues I had was with how it was marketed as "dystopian" with "urban fantasy" and "mythological realism" - that made me expect one kind of story, but really this story is more accurately described as survivalist with a healthy dose of science fiction.

Freya Catten is running from the Takers ever since her mother left her five years ago. It seems that no matter where she goes, the Takers follow, and she knows that she must not get caught at any cost. Freya doesn't know where her mother is, why she disappeared, or really anything about her current situation, and she won't rest until she finds answers.

I thought Freya was an interesting heroine. She is fiercely independent, almost to a fault - she's so used to making it on her own that she runs away from much-needed help. She was very realistic - her thoughts and feelings and worries were all very realistic, and she doesn't spring out random superpowers or kick-ass fighting moves - which made her refreshing in a genre where the main character usually has some sort of special skill or trait. That isn't to say Freya isn't special - she is in fact far more valuable and unique than she realizes - but she's very relatable as an average girl.

As I mentioned earlier, this book didn't start out so great for me. The chapter endings were really abrupt sometimes, and I didn't think there was a good flow. The dialogue seemed forced or awkward at times, which also broke up the flow. A bunch of descriptions were awkward or redundant - I think the author is very fond of adverbs and adjectives:
"[A] slender woman in her mid-thirties with light chocolate skin beautifully accented by her orange sundress smiled brightly as we walked past" (and that's a character who never appears again!). Generally, the writing style felt clumsy to me, and it was distracting enough that I didn't really connect with the story as much as I would have liked to. There was also a customary romance, which I found a bit cheesy but sweet all the same.

Still, the second part of it had a lot more action, more revelations, and more of the heart of the story, and I really enjoyed it. I thought the whereabouts of Freya's mother and the reasons for everything that had happened until that point were handled really well. I also liked the allusions to Norse mythology and the goddess Freya (although again, I wouldn't really call it mythological realism).

This isn't an amazing read, but I did like it. If you like stories about people on the run and or ones that have twists along the science fiction route (not the paranormal/fantasy one), you will enjoy this book! 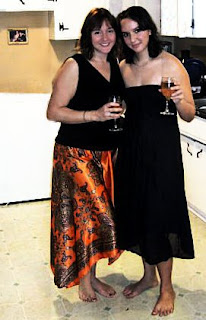 AUTHOR BIO
I am an author and university student. I live in a recreational vehicle -- by choice -- with my awesome husband, four amazing kids, and huge, fluffy, 85 pound golden retriever named Titan. I write and do school on line as we travel throughout the U.S. and Canada. It is incredible to live in a new place every few months (sometimes weeks) and to see everything! We have lived this clan and tribal lifestyle for two years now and have been to over twenty national parks and forests. They gave me a lot of inspiration for Freya's story.

Unlocking Brísingamen, the next book in the Scars Saga, will be released very soon!

Here's a "guest post" by Freya Catten, the protagonist of this story:

I was named after the great Norse goddess, but I don't know why – I'm certainly not great.

I was raised by my mother – hidden in the deepest wild spaces left in North America. It's been no fairytale either – no winged godmothers, no magic spells – we have scraped and survived out here against the elements and hewed out an existence with our bare hands and with mostly no contact with other people.

She never told me who my father is, or if we have other relatives. And five years ago, she abandoned me out here on my own. Yeah, she was mental.

She would talk without end about the stupid Bifrost, then later about the Takers – and one day she just disappeared.

But I won't talk about any of that – those are my secrets.

That isn't completely true, the Takers are real – rapelling on silver cords out of the deep blue sky from nowhere – snatching up the nearest, unsuspecting victims then evaporating without a trace. They scare me more than anything, and I think... I think they are really after me, but I have no idea why.

I decided that I have to find my mother, no matter what it takes.
I need answers – like who I am. I don't even have a birth certificate or a home, and that's all I really want.

Then I met Theron. I want to trust him. I want to let all of my walls down, but I don't know if I should, or even if I can.

I want to live a normal life, but my mom told me – brainwashed me really – to stay away from people.

Like a bedtime story, she would tell me, “Society has a tendency to destroy and eliminate what it does not understand.”


And...there's a giveaway! If you're interested, fill out the Rafflecopter form below~
a Rafflecopter giveaway