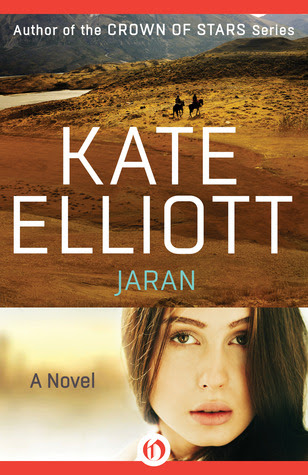 Goodreads Summary:
The first book of Kate Elliott’s epic Novels of the Jaran, set in an alien-controlled galaxy where a young woman seeks to find her own life and love, but is tied to her brother’s revolutionary fateIn the future, Earth is just one of the planets ruled by the vast Chapalii empire. The volatility of these alien overlords is something with which Tess Soerensen is all too familiar. Her brother, Charles, rebelled against them at one time and was rewarded by being elevated into their interstellar system—yet there is reason to believe they murdered his and Tess’s parents.Struggling to find her place in the world and still mending a broken heart, Tess sneaks aboard a shuttle bound for Rhui, one of her brother’s planets. On the ground, she joins up with the native jaran people, becoming immersed in their nomadic society and customs while also attempting to get to the bottom of a smuggling scheme she encountered on her journey there. As she grows ever closer to the charismatic jaran ruler, Ilya—who is inflamed by an urgent mission of his own—Tess must choose between her feelings for him and her loyalty to her brother.Jaran is the first volume of the Novels of the Jaran, which continues with An Earthly Crown, His Conquering Sword, and The Law of Becoming.


It's books like these that keep me coming back to sci-fi. Jaran is set in a the future where alien species and humans coexist rather delicately, vying for power. This is only one side of this story, however, and a rather small side at that. The majority of the book hardly reads like science fiction at all - the protagonist, Tess, finds herself learning about and assimilating into the jaran culture, one that is markedly different from the Westernized world she has grown up in. Along the way, she builds friendships, thwarts foes, learns to wield a saber, falls in love, and ultimately discovers herself.

I loved the world of the Jaran. You would think the whole nomadic tribe concept would get stale, but Elliott delivers a world that I would almost want to live in. The women are the ones in charge in this culture, and the freedom they had to make decisions for themselves and their families was refreshing. I thought it interesting that while the women chose their lovers, the men chose their wives. The Jaran people ride like the wind upon their horses, always restless and searching for more to explore and experience. As Tess absorbs this new way of life, she really spreads her wings and becomes a far more liberated person, even though she her instinct is to hold herself back.

While the plot is slow-moving (the first half was especially long), I didn't really feel bored. I was captivated by the world and the mysteries of the characters and their individual motivations. You really get to know these characters, and they felt very real to me. Once things get going, though, things really pick up. They aren't really twists so much as bends in the road, shuffling the dynamics between characters and cultures as they learn more about one another.

Tess was an incredible main character. I really enjoyed reading about her transformation from someone burdened by her association with her infamous brother to someone free to live and love as she pleases. Bhakhtiian was equally dynamic and incredibly intense. You never quite know what he's up to or what he's really thinking, but you know for sure that this incredibly proud but very courageous man has something up his sleeve. I adored Yuri with all his babbling, and his relationship with Tess was really sweet. I didn't like Kirril much at first, but by the end of the novel I really liked him as well. Even the more minor characters had personality and none of them blended into one another. I will admit that I was a little confused with the dozens of names as more and more tribes and relationships were introduced, but it wasn't too bad.

The whole mystery involving the Chapallii didn't seem so relevant during the first half of the book other than the fact that it was why Tess came to the planet of the Jaran in the first place. I felt like the Chapallii conflict could have been a little more intense in the middle of the book, because it kind of fades before coming back full force towards the end. Still, there was definitely enough going on with the other subplots that I was entertained the whole way through.