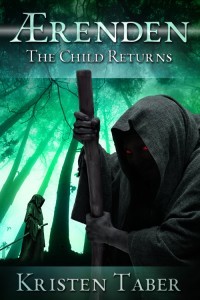 Goodreads summary:
Seventeen-year-old Meaghan has no idea her perfect life has been a lie — until she witnesses her parents’ brutal murders at the hands of red-eyed creatures.
After nearly sharing their fate, she escapes with her best friend, Nick, who tells her the creatures are called Mardróch. They come from another world, and so does she. Now that the Mardróch have found her, she must return to her homeland of Ærenden or face death.
Left with little choice, she follows Nick into a strange world both similar to Earth and drastically different. Vines have the ability to attack. Monkeys freeze their victims with a glare. Men create bombs from thin air. Even Meaghan’s newly discovered empath power turns into a danger she cannot control.
But control becomes the least of her worries once the Mardróch begin targeting her. When Nick confesses he knows the reason they want her, she learns the truth behind the kingdom's fifteen-year civil war — a long-buried secret that could cost Meaghan her life.

This wasn't quite what I was expecting, but I was pleasantly surprised! Aerenden: The Child Returns is about Meaghan's journey to an unknown world after witnessing her parents' brutal murder. With her friend Nick as a guide, Meaghan discovers the truth about her life and her identity, all while trying to stay alive.

I thought the author did a good job of creating a parallel world and connecting it to the real world. Aerenden is a kingdom in this parallel world, and its inhabitants are all born with certain powers - healing, sensing danger, receiving visions, reading emotions, etc. People coexist surprisingly well for such a diverse community, but of course there is a power-hungry twisted bad guy who wants to control the world. This man, Garon, isn't actually a character you get to meet in this book, but you do see his twisted creatures in action. These creatures are the Mardróch, which paralyze their prey with fear by looking at them. I really liked the (terrifying) concept of the Mardróch, and I felt like they were one of the most well-imagined and best parts of the book.

Yes, I thought the antagonist's creatures were the best part of the book - not the antagonist himself, nor the protagonists. I didn't find the main character particularly compelling in this novel, but I did think that she grew quite a bit throughout the course of the book. Since the majority of this book was setting up the major conflict of this series, I think Meaghan will become a stronger character in the later books.

Meaghan starts out rather passive, and just goes along with what people tell her. She might ask a few questions but won't push it if people refuse to giver her answers. She struggles to understand things, and has an admirable stubbornness when it comes to following her moral compass, but she doesn't really get to do much. This is partly the fault of Nick, her friend/Guardian/love interest, who is bent upon protecting her. While he has good intentions, it got tiresome to keep reading conversations that went along the lines of:

Meg: "Why didn't you tell me this deep dark secret/terrifying truth earlier?
Nick: "I wanted to protect you from the world as much as possible, dearest!"

I take issue with this because it implies that Meaghan is too weak to handle the truth (or at least that Nick thinks so), and we are led to believe that she is in fact a strong and capable leader with much potential for greatness. It's hard to reconcile who she is supposed to be with how she acts and how others treat her, because at least for me there was a conflict there.

As I mentioned before, I felt like this whole book was one big set-up for something big to come later. Although the end of this book was intense, the majority of it was Meg figuring out her new role and trying to navigate her relationships with people. I think a lot of what she learns and how she grows throughout the novel is important, but I just wish there was a little more intensity and urgency in the plot to go along with it.

I think I got a lot of negative things out of the way, but I want to stress that I did enjoy this book. I was pleasantly surprised by the introduction of many multi-faceted secondary characters, and I'm excited to hear about their pasts and futures. It's nice to see relationships between people besides the main characters, since this usually takes precedence over everything else in most YA. I also liked that Meaghan and Nick not only had adults guiding their lives, but that those adults weren't just background noise (again, a problem that plagues most YA). And as mentioned before, I found the concept of the world very intriguing.

I would have liked to see a darker, more intense story to go along with the opening, but I think that may have to wait for later books. Overall, not a bad fantasy novel.