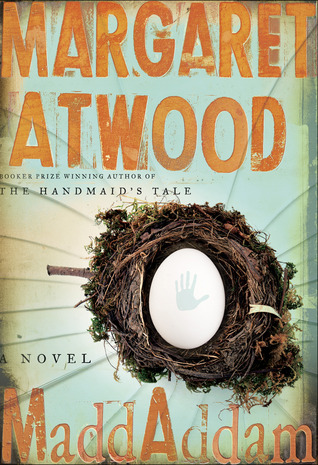 Goodreads Summary:
A man-made plague has swept the earth, but a small group survives, along with the green-eyed Crakers – a gentle species bio-engineered to replace humans. Toby, onetime member of the Gods Gardeners and expert in mushrooms and bees, is still in love with street-smart Zeb, who has an interesting past. The Crakers’ reluctant prophet, Snowman-the-Jimmy, is hallucinating; Amanda is in shock from a Painballer attack; and Ivory Bill yearns for the provocative Swift Fox, who is flirting with Zeb. Meanwhile, giant Pigoons and malevolent Painballers threaten to attack.
Told with wit, dizzying imagination, and dark humour, Booker Prize-winning Margaret Atwood’s unpredictable, chilling and hilarious MaddAddam takes us further into a challenging dystopian world and holds up a skewed mirror to our own possible future.


This was an excellent end to an excellent series. I love Margaret Atwood's science fiction because it's incredibly horrific yet plausible at the same time. She captures both the atrocities and the greatness that humans are capable of; even if we see the horrors we inflict on one another, in the end it's the beauty of our interactions with one another that take the spotlight.

MaddAddam continues immediately where Year of the Flood finished. We have already seen this scene from Snowman's and Ren's points of view; this time it's Toby's turn. Toby has taken on the role of story-teller to the Crakers, in the tradition of Oryx and Snowman. Although reluctant at first, Toby eventually learns to navigate the Craker culture while struggling to keep the human community alive. The other point of view in this story is Zeb. We finally learn about Zeb's past and how he was connected to Adam and the Waterless Flood. The story weaves together all the characters from the previous books while also expanding tremendously on the Crakers. For once the Crakers are directly a major part of the story instead of an idea or an indirect force.

This story is nothing if not intense. There isn't quite as many horrors as The Year of the Flood, but there is still plenty to worry about. The murderous, sadistic painballers are still out there, and there are still hybrid animals out to eat whatever they can find, not to mention good old human mistrust and struggle for survival. There is a bit of a love story here, but it's a very different kind from the usual "swept me off my feet" kind of love story. The entire book is peppered with stories told to the Crakers, and it's interesting to see our world through their eyes. This book requires a lot of thinking, but it's really interesting to re-examine our world and our flaws. There were plenty of moments that had me gagging or recoiling in horror, but there were also moments that had me smiling like an idiot or chuckling at something witty. The quote in the blurb about this book being "Told with wit, dizzying imagination, and dark humour" is completely accurate - the story is both cerebral and emotional, and it's rare that both aspects of a book can be done really well, but this is one of those times.

I really liked Toby's and Zeb's points of view. They are more mature than the previous narrators, and have seen more of the world. They might have come off as jaded or weary, and at times they were justifiably so, but they were also driving forces in their new community. They made things happen, even if it took some hard decisions. Toby especially was constantly weighing relationships between people and individual motivations, trying to figure out who to trust and how to survive. Everyone here is complex, and the situation even more so.

Margaret Atwood is brilliant, and this book is the cherry on top for this already excellent series.