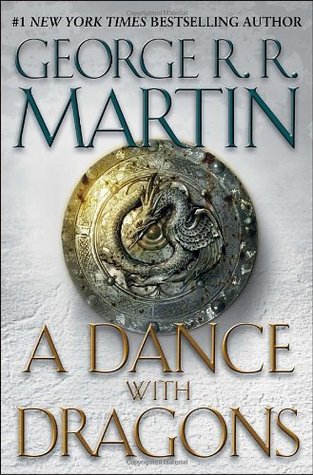 
Goodreads summary:
In the aftermath of a colossal battle, the future of the Seven Kingdoms hangs in the balance — beset by newly emerging threats from every direction. In the east, Daenerys Targaryen, the last scion of House Targaryen, rules with her three dragons as queen of a city built on dust and death. But Daenerys has thousands of enemies, and many have set out to find her. As they gather, one young man embarks upon his own quest for the queen, with an entirely different goal in mind.
Fleeing from Westeros with a price on his head, Tyrion Lannister, too, is making his way to Daenerys. But his newest allies in this quest are not the rag-tag band they seem, and at their heart lies one who could undo Daenerys's claim to Westeros forever.
Meanwhile, to the north lies the mammoth Wall of ice and stone — a structure only as strong as those guarding it. There, Jon Snow, 998th Lord Commander of the Night's Watch, will face his greatest challenge. For he has powerful foes not only within the Watch but also beyond, in the land of the creatures of ice.
From all corners, bitter conflicts reignite, intimate betrayals are perpetrated, and a grand cast of outlaws and priests, soldiers and skinchangers, nobles and slaves, will face seemingly insurmountable obstacles. Some will fail, others will grow in the strength of darkness. But in a time of rising restlessness, the tides of destiny and politics will lead inevitably to the greatest dance of all.


I guess I should have realized that when one book takes place during the same time as the previous one, not much is going to happen. But it's still annoying to plod through a book that's over a thousand pages long and then realize that you can summarize everything new in a couple of sentences.

A Dance with Dragons features all the characters in the North and across the sea that were left out of a Feast for Crows (Jon, Tyrion, Daenerys, Arya, some of the Greyjoys) . There are also a couple of chapters towards the end that bring back Cersei, Jaime, and some others. In a nutshell, though, not much happens at all. You find out what Daenerys was up to while every other person in Westeros is plotting to get married to her, and what was happening on the Wall when Sam was sent away.

This book is so long, and so dull. Have I mentioned that not much happens? Those few chapters of Arya were the only things that made me want to keep reading, and things picked up in the last one hundred pages. There are just too many points of view, and too many minor characters that suddenly become important. Most of the characters are either preparing to fight a war or are dealing with the aftermath of one. It's like this book is one giant pause between things actually happening. There were a couple of other things that bugged me about this book - everyone everywhere kept saying something along the lines of "words are wind" or "this is the game of thrones, after all". It bugged me that the same contrived phrases would show up in different characters' thoughts, even when they are on opposite ends of the world.

I decided to stop reading after the third book because I didn't think this was going anywhere, but after a lot of pressure from people who loved the series, I finally gave in and read the next two. I did like the fourth book, but this one went absolutely nowhere (do you see a pattern? I'm sorry, I just don't have much to say about this book because there really isn't anything to comment on). I think I keep waiting for that moment that will make me love this series again (yes, I loved the first book - it just went really downhill from there), but it doesn't look like that moment is going to come anytime soon. Seeing as I'm going to have to wait a couple of years before the next book is out, and judging by the way things are panning out, I think I might just look up what happens to these characters on wikipedia ten years from now (who knows if the series will even be finished by then!).