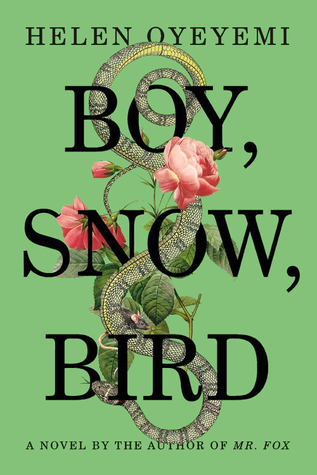 
Goodreads Summary:
In the winter of 1953, Boy Novak arrives by chance in a small town in Massachusetts, looking, she believes, for beauty—the opposite of the life she’s left behind in New York. She marries a local widower and becomes stepmother to his winsome daughter, Snow Whitman.
A wicked stepmother is a creature Boy never imagined she’d become, but elements of the familiar tale of aesthetic obsession begin to play themselves out when the birth of Boy’s daughter, Bird, who is dark-skinned, exposes the Whitmans as light-skinned African Americans passing for white. Among them, Boy, Snow, and Bird confront the tyranny of the mirror to ask how much power surfaces really hold.
Dazzlingly inventive and powerfully moving, Boy, Snow, Bird is an astonishing and enchanting novel. With breathtaking feats of imagination, Helen Oyeyemi confirms her place as one of the most original and dynamic literary voices of our time.


This book seemed really intriguing, and I was excited to read a literary take on the Snow White tale. The basic premise is that Snow and her father are pale-skinned African Americans, which the (white) "Evil stepmother" finds out when her child is born dark-skinned. Mirrors and reflections play a large role in this story, and are almost a character on their own. There is so much potential for discussion about race and identity, appearances and illusions. I was prepared to be enchanted and inspired, so I just kept reading, waiting for that moment when everything would click.

I didn't really connect with the characters, and for over half the story, nothing really happened. The cover flap tells you that the stepmother, Boy, will feel betrayed by Snow when her child is born dark while Snow is pale and pretty. That doesn't even happen until a good 3/4 of the book is over. Boy was a petty, petulant, and selfish character. If we were supposed to empathize with her and see her jealousy as anything more complex, I did not get that message. The titular Snow was hardly present in the story, so her dynamics with the other women in the story were not as strong or visible as they could have been. Bird is a child, but her narrative voice sounds like an adult. She just flits around in the background, and I didn't think she added anything to the story.

I guess my main complaint is that all the characters seem so faded. I can't think of any other way to describe them. They're all cold and distant, so I didn't feel invested in their story, nor could I understand or empathize with their struggles.

And then there was the random and almost nonsensical ending that literally came out of nowhere. It brought in a new can of worms that there was definitely not enough time to deal with, so instead of closing things up, it just made the rest of the book seem like a waste.

I really was excited for this book, but it was rather disappointing.