We're over halfway through Lies of Locke Lamora!

If you're just joining in, check out the intro post for the schedule and other details!

What we're reading this week

Flashbacks: We learn more about Chains' trials for the boys, including how Jean Tannen learned to fight and a certain scheme that involves keeping someone down until Jean Tannen comes back...

Present Day: We finally meet the Falconer, Nazca is killed, Locke plays the Gray King is practically destroyed by a livid Capa Barsavi.

This Book was called "Complications", and that certainly describes this part of the book really well. Although the complication is initially a benign, "let's find a way to not marry Nazca without offending dear old Capa Barsavi," it ends up being the enormously harrowing "let's try to avoid being killed when we're trapped between a Bondsmage and a furious, bloodthirsty father"!

If you haven't already figured this out about the Gentleman Bastards series, you absolutely cannot count on the fact that your favorite characters are going to be okay.

And since this was such a dark section, here's something to cheer you up from In A World Full of Tasters: 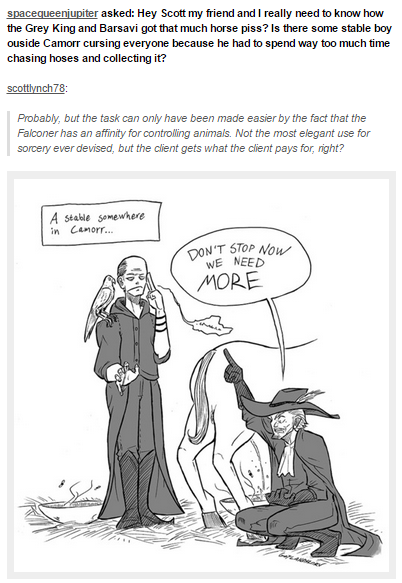 How do you think things will turn out for Locke? Any thoughts on who the Gray King is?