Goodreads Summary:
Princess Winter is admired by the Lunar people for her grace and kindness, and despite the scars that mar her face, her beauty is said to be even more breathtaking than that of her stepmother, Queen Levana.
Winter despises her stepmother, and knows Levana won’t approve of her feelings for her childhood friend—the handsome palace guard, Jacin. But Winter isn’t as weak as Levana believes her to be and she’s been undermining her stepmother’s wishes for years. Together with the cyborg mechanic, Cinder, and her allies, Winter might even have the power to launch a revolution and win a war that’s been raging for far too long.
Can Cinder, Scarlet, Cress, and Winter defeat Levana and find their happily ever afters? 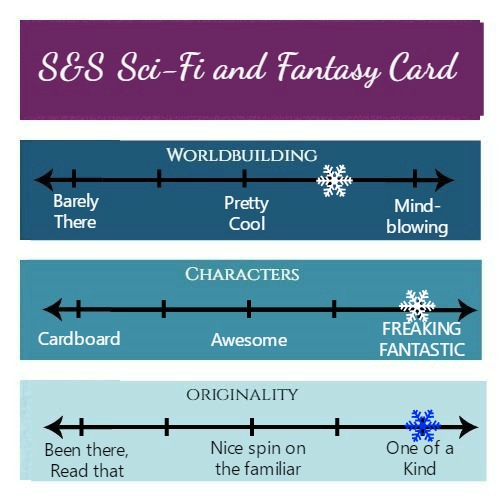 One of the best series endings ever :)

I will always have a soft spot for fairy tale retellings, but I don't think anything else is going to come close to how much I love this series. Cyborg Cinderella, a fierce French Red Riding hood, computer hacker Rapunzel, and a gentle, kind of insane Snow White. Plus a little android who is as badass as she is girly! So much girl power and so many shattered stereotypes, lots of endearing characters and characters that make my skin crawl...this book (and this series) is just PHENOMENAL!

I raced through this 23 hour audiobook in five days, if that tells you anything about how much I enjoyed this :)

I really don't want to go into the plot of this book in any way because I don't want to spoil any of it. This is quite a long book, and it takes a lot of meandering paths before it gets to the end. There are a lot of elements in this book that I was pleasantly surprised about, including getting to see Luna and learn more about daily life on the moon colony. I don't want to say anything else I really liked, because half the fun was the aha moment of discovery when little details clicked into place.

I will say that the end is bittersweet, but I love that it wasn't a cookie-cutter happy ending. It was very realistic and allowed the characters room to grow and develop outside of these four books. That said, I'm very excited for the epilogue in Stars Above!