Review: Orange is the New Black 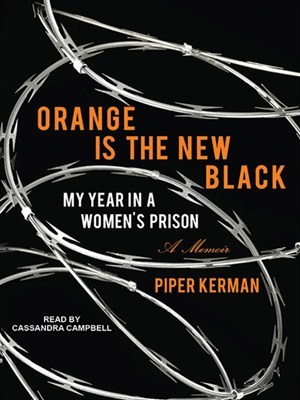 Goodreads Summary:With a career, a boyfriend, and a loving family, Piper Kerman barely resembles the reckless young woman who delivered a suitcase of drug money ten years ago. But that past has caught up with her. Convicted and sentenced to fifteen months at the infamous federal correctional facility in Danbury, Connecticut, the well-heeled Smith College alumna is now inmate #11187-424—one of the millions of women who disappear "down the rabbit hole" of the American penal system. From her first strip search to her final release, Kerman learns to navigate this strange world with its strictly enforced codes of behavior and arbitrary rules, where the uneasy relationship between prisoner and jailer is constantly and unpredictably recalibrated. She meets women from all walks of life, who surprise her with small tokens of generosity, hard words of wisdom, and simple acts of acceptance. Heartbreaking, hilarious, and at times enraging, Orange Is the New Black offers a rare look into the lives of women in prison, why it is we lock so many away, and what happens to them when they're there.


I don't often read nonfiction, but I've discovered that I enjoy listening to biographies on audiobook. Even though the narrator is rarely the author, I just enjoy the idea of someone telling me their story.

This book taught me a lot about women's prisons in America, a lot of which surprised me. Still, I can't shake the uncomfortable thought that Piper Kerman's blonde hair and blue eyes made her prison stay a lot more favorable than most peoples' experiences (she herself says that her middle-class white appearance made it a lot easier to get things she wanted on multiple occasions and that people were often surprised to see "someone like her" in prison). To me, this is a book about privilege as much as it is about solidarity and struggling to get through a very difficult situation.

Piper is a middle-class, free-spirited young woman who somehow stumbles into the drug smuggling trade. She isn't actually involved in it, just joins her dealer friends as they travel across the world. Until one day she does get involved, and however small her role is, she still faces quite a hefty sentence.

One of the things that I couldn't get over was how incredibly lucky Piper is. Yes, she made a mistake in her 20s and had to pay for it over a decade later, but as she mentions throughout the novel, she has a lot of love and support to help her get through it. Her parents are obviously shocked when she first tells them, but they are supportive and do everything they can to help her out. Her fiance is a constant source of comfort and support. Even her fiance's parents are kind and understanding. I was just imagining myself in Piper's shoes, and I can say without a doubt that my parents and imaginary in-laws would probably disown me, or at least give me a really hard time before they came around and tried to help me. Piper is lucky enough to be blonde, white, and middle class; she gets amazing legal representation and the sympathy of most judges, jury members, and even prison guards because she doesn't "look like a criminal".

I appreciate that the author acknowledges her advantages and realizes that others have it a lot worse than her, but I don't think the author quite realizes how privileged she truly is. A lot of the time the author came off as self-congratulating for "not being a racist" because she chose to make friends with women of color in prison instead of sticking with the "safer" white middle class women. I can't quite put my finger on what bothered me about Kerman's account, but there is definitely a more thoughtful way to discuss race and racism within the prison system.

I did really like hearing about the stories of many of the women at Danbury Federal prison. I grew to care about a lot of the inmates, and even if some of their accounts and all of their names have been changed for their privacy, I felt like I was getting to know some amazingly strong and resilient women. I really liked how this book focused on the support system the women provided to each other, and all the little gestures of kindness that they showered on one another. I guess I always imagined prison to be a cold and awful place, and we do get a glimpse of that later on in the novel, but I was pleasantly surprised to see such kindness from women in truly hopeless situations. Many of the women in the prison have worse things to go back to once their sentences are over, be it abject poverty or a dysfunctional/abusive family, and yet they smile and help their fellow inmates out when they can. My heart broke for many of these women.

This memoir is definitely worth reading to get a better glimpse into the unfairness of the federal prison system, but it's also a wonderful account of the friendship between many different women. It's infuriating and endearing in turns, and I'm glad I read it!