Review: The Wrath and The Dawn

Goodreads Summary:One Life to One Dawn.
In a land ruled by a murderous boy-king, each dawn brings heartache to a new family. Khalid, the eighteen-year-old Caliph of Khorasan, is a monster. Each night he takes a new bride only to have a silk cord wrapped around her throat come morning. When sixteen-year-old Shahrzad's dearest friend falls victim to Khalid, Shahrzad vows vengeance and volunteers to be his next bride. Shahrzad is determined not only to stay alive, but to end the caliph's reign of terror once and for all.
Night after night, Shahrzad beguiles Khalid, weaving stories that enchant, ensuring her survival, though she knows each dawn could be her last. But something she never expected begins to happen: Khalid is nothing like what she'd imagined him to be. This monster is a boy with a tormented heart. Incredibly, Shahrzad finds herself falling in love. How is this possible? It's an unforgivable betrayal. Still, Shahrzad has come to understand all is not as it seems in this palace of marble and stone. She resolves to uncover whatever secrets lurk and, despite her love, be ready to take Khalid's life as retribution for the many lives he's stolen. Can their love survive this world of stories and secrets?
Inspired by A Thousand and One Nights, The Wrath and the Dawn is a sumptuous and enthralling read from beginning to end. 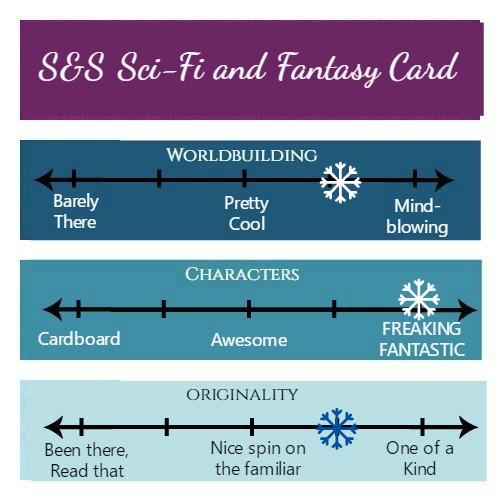 I read this book very quickly, listening to the audiobook when I was at work. I knew nothing about this book and had no idea what to expect, but I really enjoyed it.

I know the romance in this book bothered a lot of people, and yes, it doesn't totally make sense to me either (how on earth was an unfinished story intriguing enough for a "mad king" to stop a girl from being executed when he's executed so many other girls every dawn? And why did he go in to see Shazi and consummate the marriage when he never did so with the other girls? A super awkward, and frankly kind of disturbing minor detail). But can I just say that if someone is going to make a dramatic declaration of love to me at some point in my life, I want it to be Khalid's:

"My soul sees its equal in you."

That line was just so beautiful, because it showed how deep their connection was but also showed the level of respect Khalid had for the woman he loves. He doesn't love her simply because she is the most beautiful or most clever or other arbitrary superlative woman he's ever met, he loves her because their souls are equals. From a feminist standpoint, that makes me so happy. And while I had issues with how the relationship began, I was very pleased by how it grew and changed slowly throughout the novel.

What I adored about the novel was how lush the writing was. Everything was described with such elegance and intricate detail, from the ornate tapestries to the delectable food to the palace walls to the grace of swordsmen. I also really liked how prevalent friendship was in this book: Shazi and Despina, Khalid and Jalal, Tariq and Rahim. They all have their own unique rapport, and some have known each other much longer than others, but they all learned to leaned on one another for support through some very difficult and interesting times. I adored the witty banter between all of these characters and Shazi's sharp tongue especially.

I also really liked how magic was subtly woven into the world without it being overbearing. At first this book reads a lot more like historical fiction inspired by the Arabian Nights, but magic begins to take on a larger role as the book progresses. I enjoyed the mix of magic with political intrigue and warfare, because it grounded the book in plausibility while also giving it an air of mystery.

I found this book to be highly enjoyable, even though I thought the narrator's voice was a little annoying at first. The narrator's voice did grow on me, and I thought she did a great job of capturing the personalities of each of the characters with her inflection. I'm just glad I didn't have to wait too long for the sequel, though, because this book had one dramatic ending!