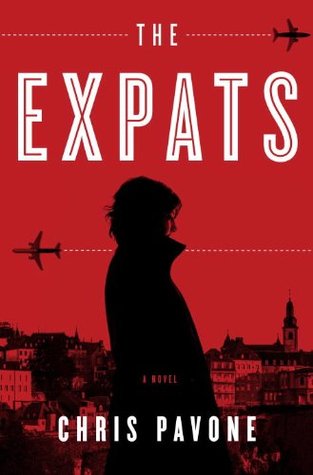 Goodreads Summary:Kate Moore is a working mother, struggling to make ends meet, to raise children, to keep a spark in her marriage . . . and to maintain an increasingly unbearable life-defining secret. So when her husband is offered a lucrative job in Luxembourg, she jumps at the chance to leave behind her double-life, to start anew.
She begins to reinvent herself as an expat, finding her way in a language she doesn’t speak, doing the housewifely things she’s never before done—play-dates and coffee mornings, daily cooking and unending laundry. Meanwhile, her husband works incessantly, doing a job Kate has never understood, for a banking client she’s not allowed to know. He’s becoming distant and evasive; she’s getting lonely and bored.
Then another American couple arrives. Kate soon becomes suspicious that these people are not who they claim to be, and terrified that her own past is catching up to her. So Kate begins to dig, to peel back the layers of deception that surround her. She discovers fake offices and shell corporations and a hidden gun; a mysterious farmhouse and numbered accounts with bewildering sums of money; a complex web of intrigue where no one is who they claim to be, and the most profound deceptions lurk beneath the most normal-looking of relationships; and a mind-boggling long-play con threatens her family, her marriage, and her life.

This was a fun spy book to listen to as an audiobook. It was interesting because it was a spy novel that mostly centered around an expat housewife, of all things. You learn very quickly that Kate is not ordinary housewife, since she used to be in the CIA. And the epigraph makes it clear that Kate isn't the only person hiding things from her spouse: "The one charm about marriage is that it makes a life of deception absolutely necessary for both parties." Thanks, Oscar Wilde.

I liked how this book wasn't a cookie-cutter thriller. The suspense isn't a bunch of adrenaline rushes and twists and turns in this book. This book uses layers of deception instead. Each revelation makes you reframe the events you've already seen, and I found this layer-by-layer deconstruction of everyone's deceptions really interesting. I also enjoyed the wry, witty little moments and conversations Chris Pavone inserts throughout the novel.

While it was refreshing to read a book where the main character has a life that includes assembling Ikea furniture and pacifying her two young kids, at times I was a little bored with how mundane everything was. Then again, the contrast between Kate's normal life and her spy life was made even more sharp because of how mundane her daily life is. It made certain scenes hilarious (imagining Kate trying to jiggle that Luxembourg-standard window open, for one).

This isn't my favorite thriller or suspense novel, but it was great to listen to. I loved the narrator's voice, and she did a great job with the fake "Oh hiiiiiii, I'm so glad to see you!" duplicitous middle class housewife voice. The book was light-hearted and didn't have too many twists and turns, so it wasn't too confusing on audio either. I definitely enjoyed it!