I think I'm doing pretty well on the reading challenge, I have 6 books and 4 1/2 months left. The manga and the novella will probably be quick, so as long as the books I'm planning on reading are available at the library, I'm golden! (Watch me still struggle to finish the last few books in December LOL)

I've read 3 more books for the challenge since my last update. I finally read Library of Fates, a book I've been meaning to read for ages! I also read Foundation, a book that I read in middle school and completely forgot about. And Persepolis, a comic book I've wanted to read for years but could never find at the library until this month. All three books were awesome!

I also finally planned all the books I'm going to read for the rest of the challenge. I was really excited about getting approved for 27 Hours on NetGalley because that was one of my crowdsourced twitter recommendations for a book with an Ace/Aro character. The only other book I've read with an Ace character is Quicksilver (featuring Tori), and I'm always looking to broaden my perspectives and support authors who bring diversity in their books. The other planned books are in gray below. 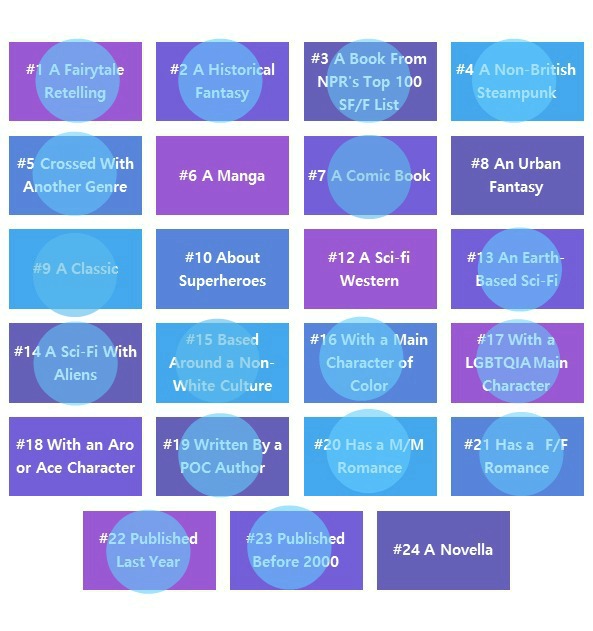 1) Fairy tale retelling: Miranda and Caliban by  Jacqueline Carey - A retelling of Shakespeare's The Tempest

2) Historical Fantasy: Range of Ghosts by Elizabeth Bear - an alternate history/fantasy based on Mongolia in the time of Genghis Khan

5) Crossed with another genre: The City & The City by China Mieville - a police procedural mystery story that's also sort of sci-fi

6) Manga: Either Death Note or Ghost in the Shell, whichever one is at the library when I go next :)

9) A classic: Foundation by Isaac Asimov

13) earth-based sci-fi: Station Eleven by  Emily St. John Mandel - a beautiful post-apocalyptic story about how people find their humanity after the end of the world

14) A Sci-fi with aliens: Waking Gods by Sylvain Neuvel - ALIEN ROBOTS EVEN BETTER

17) LGBTQIA+ MC: The Swan Riders by Erin Bow (Greta is bisexual, and some supporting characters are queer as well)

19) POC author: Stories of Your Life and Others by Ted Chiang - loved this anthology!

20) M/M Romance: A Conjuring of Light by VE Schwab - Rhys and Alucard are THE OTP

21) F/F Romance: Skullsworn by Brian Staveley - it would be spoilery to say who ;)

22) Pub 2016: Empire of Storms by SJ Maas - another epic love-hate installment of the Throne of Glass series haha