Goodreads Summary:
Connor and Lev are on the run after the destruction of the Graveyard, the last safe haven for AWOL Unwinds. But for the first time, they’re not just running away from something. This time, they’re running toward answers, in the form of a woman Proactive Citizenry has tried to erase from history itself. If they can find her, and learn why the shadowy figures behind unwinding are so afraid of her, they may discover the key to bringing down unwinding forever.
Cam, the rewound boy, is plotting to take down the organization that created him. Because he knows that if he can bring Proactive Citizenry to its knees, it will show Risa how he truly feels about her. And without Risa, Cam is having trouble remembering what it feels like to be human.
With the Juvenile Authority and vindictive parts pirates hunting them, the paths of Connor, Lev, Cam, and Risa will converge explosively—and everyone will be changed. 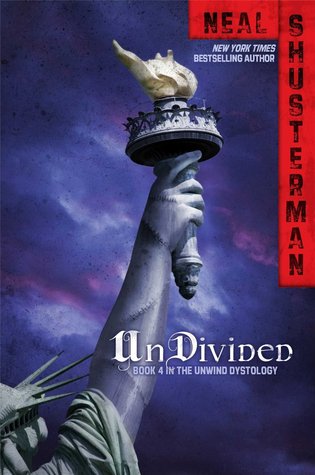 Goodreads Summary:
Teens control the fate of America in the fourth and final book in the New York Times bestselling Unwind dystology by Neal Shusterman.
Proactive Citizenry, the company that created Cam from the parts of unwound teens, has a plan: to mass produce rewound teens like Cam for military purposes. And below the surface of that horror lies another shocking level of intrigue: Proactive Citizenry has been suppressing technology that could make unwinding completely unnecessary. As Conner, Risa, and Lev uncover these startling secrets, enraged teens begin to march on Washington to demand justice and a better future.

But more trouble is brewing. Starkey’s group of storked teens is growing more powerful and militant with each new recruit. And if they have their way, they’ll burn the harvest camps to the ground and put every adult in them before a firing squad—which could destroy any chance America has for a peaceful future.


Unwind is still the book that moved me and horrified me the most, but UnDivided is a close second! What an intense, fitting ending to a very thought-provoking series. I read these two books almost back-to-back, so I'm almost reviewing them as one book.

I'm extra partial to this series because as a bioengineer, it's my job to make sure we have ways to get new "parts" without ever needing to unwind people. Yet a lot of the (real life!) news articles and links were chilling to the core and serve as a reminder of how fine the line between saving lives and destroying them actually is.

I've grown up on Neal Shusterman books, and I don't think they'll ever get old. Sure, this series isn't as brutal or cynical as many adult dystopian novels (Paolo Bacigalupi, your books kill me sometimes but I love them anyway!), but it is still just as thought-provoking and terrifying in a quieter way. It's not all blood and guts (except when it is...and in this book...eep), it's a lot more psychological. How would you feel if your hands had the muscle memory to play a song you've never heard of? How would you deal with staring at half your face on someone else? Could you live with yourself if you decided your child was better off in pieces than whole? It's not so hard to imagine the circumstances that push people into staying silent in horrific situations.

As this series has progressed, there have been more and more POVs introduced. I liked getting to know all the characters because it gave me more perspectives and more people to root for (or hate, as it were). I did feel like book 4 was pushing it in terms of POV characters, because I always had to wait a long time before I heard from each set of characters again, but I did enjoy all of their perspectives and I didn't think any of them were boring or unnecessary.

Go read this series. Even if you don't make it through four books, Unwind is a must! And if you do want to continue, well, this is an end worth getting to.