Goodreads Summary:The world is at peace, said the Utterances. And really, if the odd princess has a hard day, is that too much to ask?
Greta is a duchess and crown princess—and a hostage to peace. This is how the game is played: if you want to rule, you must give one of your children as a hostage. Go to war and your hostage dies.
Greta will be free if she can survive until her eighteenth birthday. Until then she lives in the Precepture school with the daughters and sons of the world’s leaders. Like them, she is taught to obey the machines that control their lives. Like them, she is prepared to die with dignity, if she must. But everything changes when a new hostage arrives. Elián is a boy who refuses to play by the rules, a boy who defies everything Greta has ever been taught. And he opens Greta’s eyes to the brutality of the system they live under—and to her own power.
As Greta and Elián watch their nations tip closer to war, Greta becomes a target in a new kind of game. A game that will end up killing them both—unless she can find a way to break all the rules. 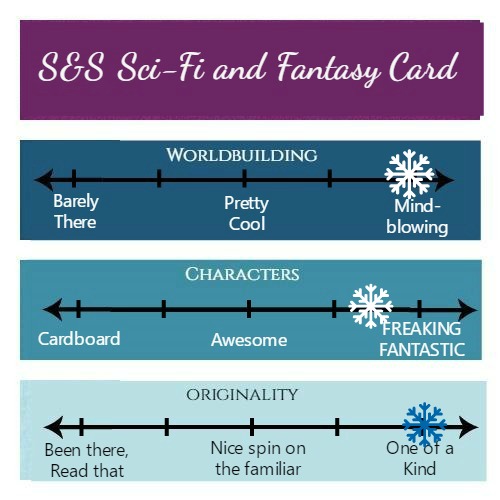 There are a lot of science fiction books, especially YA science fiction books, that claim to be unique or thrilling or captivating or gorgeously written. Sometimes all of those descriptors are true, but usually I'm left raising my eyebrows at an over-enthusiastic publicist. Thankfully, this book really is extraordinarily unique, well-written, and thrilling. It's not at all what I was expecting, and I've never read anything else quite like it. I absolutely loved this book!

The Scorpion Rules takes place in a future where an AI has taken over the world and keeps messy human politics under control by holding the children of world leaders as hostages. When any political unit decides to declare war against another, the children of both parties are sacrificed. It's brutal, but effective; then again, sometimes the life of one person, however precious, may not be worth as much as the safety or well-being of a nation. The whole thing is one big mind game, one massive game of chicken with huge stakes. It's terrifying, but so brilliantly thought-through.

Most of the story takes place in the idyllic area where the child hostages are kept. They tend to goats, they harvest food from their garden, they read books, they crush apples to get juice...things aren't so bad. Until the apple crusher starts being used for things beside apples.

I hope that image is enough to pique your interest, because the entire first half really has nothing going on in terms of action or any real stakes. An event occurs right in the middle of the book that suddenly escalates the intensity and twists the story into directions I never anticipated. It was just so epic!

Besides the political manipulations and mind games, the book also gives you a lot to chew on with the AI element. Are cyborgs and AIs more machine or more human? Once human, always human? Who is really the brutal one here, the AIs or the humans? There's also some interesting commentary about the role of media in war and politics.

I haven't even begun talking about the characters, but I'll just leave you with the fact that the women are fierce as hell, the quiet characters have more to them than you'd expect at first glance, and the romance isn't what you'd expect based on the blurb but it's perfect for this story.

This book isn't afraid to deliver on its threats. This isn't a book where anyone really escapes unscathed, and it certainly doesn't have a nice, neat happy ending. I loved that about this book, but I can see how that isn't for everyone. I highly recommend this book if any of what I said sounds interesting to you!