Goodreads Summary:Luxury spaceliner Icarus suddenly plummets from hyperspace into the nearest planet. Lilac LaRoux and Tarver Merendsen survive – alone. Lilac is the daughter of the richest man in the universe. Tarver comes from nothing, a cynical war hero. Both journey across the eerie deserted terrain for help. Everything changes when they uncover the truth.
The Starbound Trilogy: Three worlds. Three love stories. One enemy. 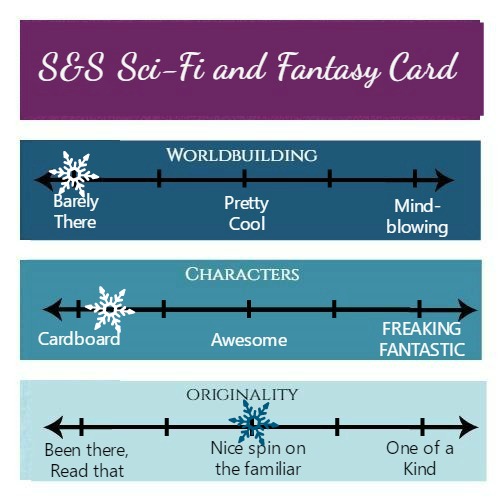 I'll admit that when I first heard about this book, I was a little skeptical when I saw that flowing green dress on the cover. Flowing dresses on sci-fi book covers never ends well for me, but then I saw that almost everyone I knew who read this book ended up loving it, so I decided to give it a shot. Then there were alllll the reviews about how original this book was, how much science there was, how it was a survival story with a romance on the side instead of the other way around.

I think Emily May's review sums it up quite nicely: This is a romance novel, with a mysterious science fiction plot that only serves to progress their romance. There was hardly any worldbuilding, and most of the hazardous situations involved in the "survival on an alien planet" plot thread felt contrived (Oh, it's freezing, let's cuddle together for warmth because we're both beautiful people who don't have feelings for one another, nope!). I kept waiting for something actually terrifying to happen, or for the stakes to get raised, but they didn't until the very, very end and at that point I didn't care anymore.

Neither of the characters really captured my imagination or stole my heart. I couldn't care less about spoiled, selfish Lilac. Oh boo, you're the untouchable daughter of the richest man in the galaxy and all your friends are after your money and wealth, the horror. I did appreciate that she had some tricks up her sleeve (go women engineers!) but I just didn't like her. I didn't like Tarver either. His character was built around so many stereotypes and we were supposed to root for him despite his close-minded and stubborn attitude. I just couldn't get past the cardboard characters enough to care about what happened to them.

The "big stakes" reveal at the end was interesting, but I felt like the solution was too easy. There should have been way more consequences considering the nature of what they were dealing with. That just about sealed my opinion about this book: it's a romance novel pretending to be science fiction. Some people may really enjoy that, but that's the kind of book that's just not for me.